Here’s another Wordle type thing that makes an image of all the words on the blog. The more the word appears on the blog, the bigger the text. It’s interesting to see Making come up as the biggest word. Click on the image for a bigger picture. 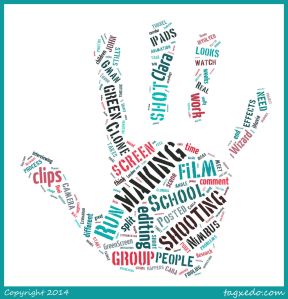 Posted by Michelle Cannon in Tagxedo | Leave a comment

We’re all aware that there are only a couple of sessions left to us as a group and there is still much to be done. Michelle talks about her research and asks the group if they wouldn’t mind filling in or decorating an accordion style (Moleskin) notebook, as they might a journal – to surprise me with any thoughts, feelings, drawings, prints of photos, collages, patterns, writing about the Club over the past 16 months.  Also perhaps thinking about accomplishments / what might be missed / remembered / the best bits/ the worst bits/ the cool bits/ the funny bits. This will help Michelle understand how everyone has felt about the process over the months.

Wizard23 and Dual2 are back so we watch the edit so far to get everyone up to date. The split screen climax shot is still not quite right – they’re not aligned perfectly. So Nimbus comes up with a possible solution – to green screen another sideways shot of the Clone and drop that over the original shot of the real Clara. Most people help set up the shot. Clara rightly complains that she’s doing her best acting at a dramatic moment in the film, whilst others are messing about and putting her off.

As it happens, after we’ve wirelessly transferred the clip and imported it onto the timeline in iMovie, there are problems with the Clone’s proportion because we’re not doing it in the same location as before and the distance and angle of the camera is different. The green screen idea fixes the alignment problem because we’re no longer splitting the screen, but the Clone now looks quite small in comparison with the real Clara on the left of the screen. This is actually quite a funny effect but we’re not sure this is what we want at this point in the movie… Mr. P suggests she could be shrinking as well as disappearing….?

Wizard23 reminds people about the idea of the “Previously on Run School Run!” at the beginning of the film, I suggest we may not have time to do this but they’re welcome to take responsibility for it.

There’s more talk about how to end the film… and tie up a few loose ends.

The Headteacher has said that we can screen the film after an assembly at the end of term and do a Q & A with the audience.

The Meeting Scene – with GreenScreen!

Well hello there! It has been ages since I last posted here! Been busy with Year 6 stuff and other things on my website. Anyway, let’s get started, shall we?

First, we watch the film that we have edited so far. In the words of 11-year-olds everywhere, ‘Shout Out’ to Michelle for editing some sound effects in to the film.

Finally, we discussed what the ending of Run School Run 2 will be like. But to know, you’ll just have to wait until the final film is produced…

Cara shoots the climax ‘meet scene’ again, and again, and again. She would have shot it yet again if we’d had the time. We find it’s really important to keep the camera still, but we don’t have a tripod for the iPad. The last time we shoot it Mr. P comes up with a makeshift tripod/trolley thing to keep the camera steady, whilst Clara shifts position in front of the camera to become the Clone on the other side of the 2-shot. See below one of the takes.

Nimbus watches the Youtube clip from the last post whilst the others are filming and figures out how to make the split screen work. In this process, because of the blue bits in Clara’s school uniform, other unexpected effects are discovered that make Clara body look like it’s semi-disappearing or that her body has been cut in half and absorbed by the Clone?…. maybe we could use this effect somehow?

In the end we’re not sure if the split screen works 100% because of a lack of alignment and we still need to work out bits of the narrative to make it flow. Dual2 and Wizard23 aren’t here today, but we may need them to come back to make the story fit together.

We try some green screen filming. The screen has been set up earlier and Gman films Clone Clara settling in back ‘home’, walking across the green background. Whatever is green can be replaced with whatever we like, an image, more film perhaps? Nimbus suggests Clone Clara touches the green screen as if she’s interacting with her stuff at home. He has a go at slotting in Wizard23’s drawn backdrop of the insides of the computer on the timeline and then putting the green screen footage on top of it. As Gman points out, peeling off bits of film on the timeline to hide the bits of film not covered by the green screen, makes it looks like she’s entering a portal.

Here’s the original green screen footage and then a clip of the editing process in iMovie …  it’s a sneak preview of the final bit of the film… It’s really great the way everyone works together on this … gathering around the screen and chipping in with editing suggestions… We’ve been quick with the filming, quick with the wireless download from iPad to Macbook, quick with the import into iMovie and finally patient and careful with the second go at making it all work in the software.

Well done guys, it looks great! Just need to think about the narrative so it makes sense to the audience. Just a few more sessions to go now….