Archive for the category “Leonardo”

Michelle does some of her research stuff: setting up an audio recorder, a few photos on the tables and some post-it notes. She wants to find out what we remember about the process from way back when we first started by writing memories, words, observations on the notes. Michelle points out a photo of Gman’s that is particularly good… this one:

It’s good because of the use of the ‘rule of thirds’ (imagining the photo split into a grid of 9 squares with balanced content in each one), the interesting natural lighting, the depth of field (seeing right to the bottom of the corridor), the composition (the arrangement of everything in the frame), AND catching Clara at exactly the right moment, in a fantastic pose in the centre of the frame. This is sophisticated photography and Gman should be really proud. Clara should also be proud as it’s not just her face that’s acting, but her whole body too. Well done!

There’s much excitement as people drift in …. we’re without Leonardo, not sure why. Dual2 nearly didn’t make it, so Michelle gives him his present before all the others … turns out he does make it to the session, but he manages to keep the gift a secret.

Some are happy to write on the post-it notes but Dual2 for example prefers to interview his peers with the audio recorder. People are sad to see that it’s all over and more some have wondered if they can come back to help with the next Clip Club – if that were to happen. Michelle says that would be good, but they could also set up their own Club in their new secondary schools, like DJess did.

We move onto the next phase where Michelle has prepared some words/questions/phrases on cards. The group take turns to pick one or two up at a time and talk about what the cards say eg.

I liked it when…

Things didn’t go so well when…

I think the best shot was…

Examples of the things the group says: Nimbus reckons it’s made him feel more creative / Dual2 recognises that film making is a process that takes planning and lots of time / Wizard23 thinks he’s got more social skills / Clara & Cara regret the times when they messed around and could have done more work.

Michelle gives everyone a present – a Celebrations box of sweets (& Mr. P some whiskey!) to thank them for making the past couple of years such a special time. We do a collective hands thing – what’s the name of that? – and go out  to take photos. Mr. P produces some pop and hoola hoops. We watch the film and the ‘Making of’ film again as Wizard23 hadn’t seen them. Much laughter at Dual2 running along the paving stones – again!

Roll on Friday 11 July 2014 – the day we screen to the school. Next post will have links to all films.

It is another small group in this session. Wizard23 has football and Dual2 is elsewhere. Nimbus chooses to edit as does Leonardo, while Clara and Cara go and shoot the climax of the film – the meet scene where Clara meets her clone. Meanwhile Gman captures it all on the stills camera. Nimbus and Leonardo begin to think about the sound track – listening to the effects and samples available in the iMovie database.

It then turns out that we need to film Nimbus – The Master – having a meltdown under the stairs so Clara does some editing while this is happening. Both Cara and Gman have goes at filming – there’s a low angle pan upwards from Nimbus’s feet to head and then a high angle shot from the stairs, looking down on a crumpled Nimbus losing his sense of power and all his computer equipment. This shot reminds us of the shot earlier in the film where Nimbus was looking up and smiling, except this time he’s falling apart and things are all going wrong.

The group even get another shot done today – of the Clone’s twitching face as her batteries start to run out. Thanks to Gman for getting these shots and showing us how the film is being put together. Loving the screen in the screen!

It feels like a workshop today because people change what they are doing depending on what needs to be done. And then others take their place. I need to go to a meeting so Mr. P takes over during the remaining time. We’re also collecting some fun bloopers in a special folder in the iMovie project. Hopefully someone will feel like editing all these together at the end. 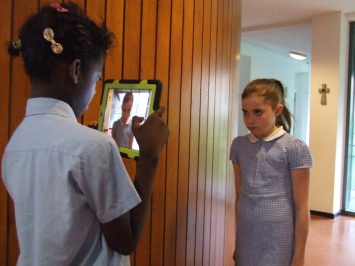 These clips were made in iMovie on the iPad in about 25 minutes. We were practicing the weird, scary, thriller genre, focussing on close-ups. There’s a photo effect called the Ken Burns effect in iMovie (this was the guy who first came up with the idea for documentary film making). It moves around the image and you can decide how/where to frame the image at the beginning of the movement and its positioning at the end – it’s useful for guiding people’s attention to certain details:

He Dies At The End – short ‘horror’ clip

We decide to get back to film clip watching and making. We watch this short horror movie by Irish film maker Damien McCarthy called He Dies At The End. Even though we know what is going to happen, it’s still scary and creepy and full of tension. Michelle records the clip clubbers’ reactions whilst watching and then some of the comments made afterwards.  Watch it and see what you think about how tension and suspense is created and maintained throughout, with the Director’s choice of images, shots and sound:

In another post I’ll put up another clip of the film director making the ‘thing’ at the end… it’d spoil the surprise if I post it here!

Filming whilst watching (in poor light):

Chat about the film afterwards:

Wizard23 filming Leonardo after watching ‘He dies at the end’:

During November we’ve been getting to grips with the Explain Everything app on the iPads and playing with its many features: animation, camera/movie function, pinching, scrolling, panning, zooming, enlarging, drawing, designing slides, voice recording, exporting to .mov files, importing photos/images, saving to Dropbox and this kind of thing. The idea is to make some digital audiovisually illustrated stories. Here are some examples of the work we’ve been doing so far:

We begin to look at how the animation in our last session – The Big Match –  is designed and how it illustrates the voice-over story. We write some things down to do with colour, setting, story and sequence. Here are some of the things we notice in the first 40 seconds of the film:

Then we split up – each with an iPad and headphones – to watch, pause and scroll through the rest of the movie to pick up other design techniques for their own ‘making of a memory’.

Here are other design elements we notice from the film:

Clara finishes early and goes to another room to record and then re-record her own story using Garageband. She’s brought a tiger soft toy with her to start collecting things to help tell the story of a trip to Dublin Zoo with her family.

Leonardo has brought a video he made on his phone – of him telling his story – but we have problems getting it off the phone. We’ll try again next week by blue toothing or using a cable.

Wizard 23 has also brought something in to share – his first football shirt. Mr. P is going to keep this safe till next week when we will have time to listen to his story and take photos.

Thanks to Nimbus for helping to set up the iPads with some efficient QR code scanning so that everyone had easy access to the clip … and then putting all the iPads away at the end!

We look at turning words into ideas into images/symbols using an app called Adobe Ideas. The idea is to use words taken from the Tagul/Wordle images and then draw on different layers to produce a pattern or graphic that represents The Clip Club. One of the things to understand about being creative is that you’re putting new things together in ways that haven’t been seen before. This activity leads onto more creative play and here is what we came up with:

Using layered moving images (and sound) to illustrate a story is what we then watch in this animation called The Big Match about a young Belfast lad who goes for a memorable day out with his Dad:

We talk about how the film makes us feel. Some say sad, weird. Leonardo says something very insightful – that the film is an inspiration because you realise that it’s possible to illustrate a story with interesting moving images whilst listening to someone telling the story. So you don’t just have to listen, like on the radio, you can listen and watch at the same time. We also talk about what poignant means … something about sadness and importance. Cara makes a connection between the layers we saw in the film and the layers we looked at in the Ideas app.

Michelle asks everyone to come next week with a story of their own and perhaps an object, so we can begin to make our own memorable stories on the iPad using some of the techniques in The Big Match.

Session 9 – Alma, editing and a little bit of blogging

In session 9 we started off by watching a clip called ‘Alma’:

This clip was an award winning animation by French (actually, Spanish) people and has won 4 competitions and several Oscars. Here is what Leonardo, GMan and DJess posted about it. I think that everyone who signs their name on the wall is the next victim of the evil, self-killing shop. Unluckily, Alma signed her name on the wall and the doll popped up in the window. Clara had an interesting idea on the fact that they monitor you through the window on the wall and pop up an appropriate doll.

After watching and discussing we continued editing our trailers while Michelle took us out, to teach us to post. I taught Leonardo.

A great session and expect to see some posts coming soon!

Alma was an animation by French people with a girl who turned in to a doll. A shot I liked was when the the girl’s life flashed before her.

Posted by leonardo in Leonardo, Sessions

It’s great to see everyone turning up for more Clipclub sessions – we’ll be carrying on into the summer months. This is important because, as we’re discovering, films take lots of time, planning, concentration and effort! Over the past 2 sessions the team has been been working on edits for a potential film trailer.

Before they get on with editing we talk about what makes a good edit:

The below clips were done in a short space of time, with only a quick demonstration on the whiteboard of what’s possible in the software. This one by Nimbus and Leonardo is particularly good and captures all the suspense of a thriller/horror trailer, made from the various bits of footage and sound taken over the past few weeks.:

Here are more practice trailers which aren’t quite finished yet:

Scream! by Nimbus and Leonardo

This is a movie that me (Nimbus) and Leonardo made in the clip club.We used iMovie to create it and added sound effects and music.

© The Clip Club (All rights reserved)

Posted by peppardjohn in Leonardo, Nimbus